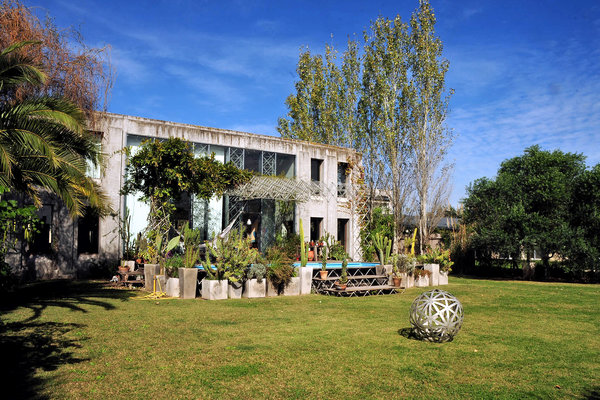 Molecule House, a villa in a gated community outside Buenos Aires, is on the market for $1.35 million.

A THREE-BEDROOM HOUSE WITH A POOL OUTSIDE BUENOS AIRES

This rectangular building, known as Molecule House for the system of interlocking aluminum rods and connectors that makes up its foundation, has 3,229 square feet of space over two floors. Its signature modular geometric structures also act as a decorative feature throughout the house — in ceilings, along windows, even as table legs and balusters. It is being sold furnished.

The central living room has a double-height ceiling and two glass-paneled walls; like most of the house the floor is in a reclaimed wood called Incienso, with a heating system underneath. It is flanked on one side by the dining room, on the other by the kitchen, which has two freestanding counters topped with thick slabs of reclaimed pine. Appliances, among them an Ariston oven and stove, are stainless steel.

Upstairs, the master suite has an air-conditioned bedroom, a white-tiled bath with a skylight and a walk-in closet. On the other side of the house, at the far end of an open walkway, are two bedrooms and a shared bath.

The property of almost 11,000 square feet is landscaped with palm and silk floss trees, flowering shrubs and a collection of cacti. A wooden deck leads back to the pool; a small geodesic dome provides a sculptural element.

Molecule House is in La Celina, a gated community of 70 homes on large lots. Polo fields are within 15 minutes’ drive; Buenos Aires is about 45 minutes away.

The market in Buenos Aires, which traditionally uses American dollars, is stagnant, in part because the government recently restricted real estate transactions in foreign currencies. Wary of the Argentine peso with its history of high inflation and depreciation, many sellers are holding back.

“The number of sales in the main market, Buenos Aires, are down 40 to 50 percent compared to the previous year, which was not a great year to start with,” he said.

But according to Martin Bricca, a managing partner of Buenos Aires Habitat, it’s a good time to buy. Those who are selling, he said, are not averse to negotiation. “Three years ago, if you offered 30 percent less than the asking price, the owners would say no,” he said. Sellers today often accept offers 15 to 20 percent under asking price.

WHO BUYS IN THE BUENOS AIRES AREA

Most foreign buyers in the Buenos Aires area are from North America and Western Europe, typically Britain, Italy and France.

There are no restrictions on foreign buyers, but financing must be obtained at home, as Argentine banks generally don’t provide mortgages. Elias Kier Joffe, the managing partner of the Buenos Aires Law Firm Kier Joffe, described real estate transactions as straightforward, explaining that Argentines typically rely on notaries public and don’t hire lawyers.

But given the recent restrictions on foreign currency, Mr. Joffe strongly suggested that foreign buyers hire a lawyer, even before contacting an agent for a property search. The lawyer, notary and closing costs together make up about 3 percent of the sale price, he said.

Foreign buyers usually wire their payments into the bank accounts that many sellers maintain abroad. The payment method must be stated in the purchase agreement and the account declared to Argentina’s Federal Administration of Public Revenue.

The broker fee is 4 percent of the sale price; additionally, a transfer tax of 3.6 percent is typically split between buyer and seller. Property tax is $1,200 a year, maintenance $400 a month.