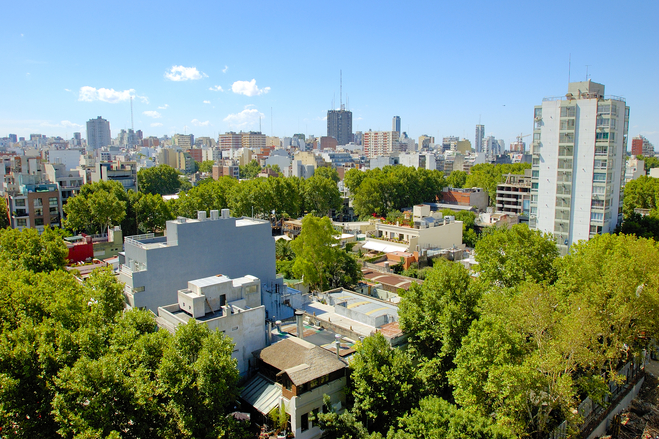 This article appeared May 3, 2013, on page M3 in the U.S. edition of The Wall Street Journal, with the headline: Foreign Buyers With Cash Can Tango in ‘Paris of South America’.

“I’m absolutely amazed by the number of choices,” said Mr. Chapman whose budget for a vacation property is 130,000 U.S. dollars—the currency in which most Buenos Aires real estate typically is traded. “It is overwhelming, really.”

With prices for luxury apartments down by 20% to 25% since last year, according to local real-estate agents, expatriates like Mr. Chapman are finding great buys in Buenos Aires after nearly a decade of steep price climbs.

Nicely renovated apartments with parquet floors and terraces in Recoleta—the neighborhood that gave Buenos Aires the moniker “the Paris of South America”—are selling for roughly $185 per square foot, down from roughly $240 in 2008, according to local agent estimates (closing prices aren’t published in Buenos Aires). One-bedrooms in trendy Palermo list for about $150,000 and sell for less. Local brokers offer listings for $200,000 to $400,000 that they say might have sold for 40% more two years ago. Some multimillion-dollar properties are being marketed for nearly half of what was asked just a few years ago.

But there is a catch to the new Buenos Aires buyers market, as Mr. Chapman’s house-hunting trip illustrates. “I actually have to cut my trip short, because I’ve run out of dollars and I can’t get any more,” he said.

For Mr. Chapman, as for other foreign home shoppers in Buenos Aires, navigating Argentina’s complicated currency landscape is the wrench in the otherwise tempting real-estate works.

In May last year, Argentine President Christina Kirchner strictly limited access to U.S. dollars and other foreign currencies in a bid to stem capital flight. With the Argentine peso facing about 25% annual inflation (government figures, widely discredited, set the rate much lower), and an unofficial exchange rate that has effectively devalued the peso sharply, demand is high for dollars.

These days, the main feature that foreign buyers say they look for in a Buenos Aires property has nothing to do with closet space or a wide terrace. It is a seller with a bank account outside Argentina to which they can legally wire funds. This is a way to get around having to convert any dollars wired into Argentina into pesos at the official rate, after which it is nearly impossible to convert back into dollars at the official rate.

The currency situation has spooked some foreigners living in the country. Real-estate agent Pericles Economides said foreign homeowners make up 90% of the sellers in his listings, while local buyers eager to convert their devaluing pesos into more stable real estate make up nearly all his current buyers.

Still, in such a climate, foreign buyers find that their dollars—in cash, as mortgages are rare in Argentina—give them market clout. Buenos Aires property developer Gabriel Maioli, a partner at M&M Developers in Buenos Aires, began selling newly built apartments in pesos for the first time last year but offers discounts to buyers willing to pay in dollars, he said.

Among luxury apartments currently on the market is the 9,200-square-foot 14th floor of the Art Deco Kavanagh Building, offering sweeping views of the city’s central Plaza San Martín and, on a clear day, neighboring Uruguay across the River Plate. Two of the bedrooms open onto terrace gardens so large their lawns require mowing. The owner, real-estate mogul Alain Levenfiche, put the property on the market in 2008 for $5.9 million but failed to sell it. Today, he is asking $3.3 million.

In Palermo Botánico, considered to be one of the city’s premier neighborhoods, a five-bedroom apartment with a bird’s-eye view from a large deck of the city zoo’s llamas, guanacos and condors is on the market for $695,000. American owners Douglas and Janet Choi, both 43, who moved to the city in 2008 for a “personal-growth opportunity” and are now planning a move to London, said they spent $200,000 on renovations that included a modern, granite-topped kitchen and a wood-burning grill on the terrace.

Some local agents have called the Chois “dreamers” because of the property’s price tag, estimating that $500,000 is a more likely selling price. Mr. Choi said the family doesn’t have “the need to sell such a special place,” and will rent if they can’t find a buyer before their move to London.

Alan Dickinson, a 50-year-old technology sales executive in New York, is looking to buy his second property in the city. “In what other world-class city can you buy property of this caliber at those prices?” said Mr. Dickinson, who raves about the city’s pasta, steak, and “really friendly, inclusive” people. Last month, he met with several Buenos Aires real-estate brokers, instructing them to alert him to distressed sellers looking for a quick, dollar-denominated sale.

In 2005, he paid $185,000 for a newly built Palermo duplex with a terrace, finally taking possession in 2009 after construction delays. He lives in it for a week out of every two months and rents it out to tourists the rest of the time. In four years, he has grossed more than what he spent on the unit, he said.

But with the new restrictions on U.S. dollars and other foreign currencies, many deals are falling apart at the 11th hour due to the difficulty in arranging payment, said Michael Koh, a real-estate investor and consultant who has made more than 500 real-estate transactions in Buenos Aires on behalf of clients. Negotiating sales, he said, has become “crazy.”

In April, two sales Mr. Koh was negotiating on behalf of foreign sellers stalled when one Argentine buyer wanted to pay with gold bars and another offered a studio apartment as partial payment.

The hurdles haven’t stopped him from investing. Mr. Koh owned eight properties in the city before closing last week on a ninth apartment. He bought a 500-square-foot, sleekly furnished one-bedroom with a balcony in Palermo Hollywood for $130,000, which he intends to rent short-term to tourists.

“I swore I would never buy anything there again,” he said, “but there are now some deals that are too good to pass up.”

Richard Maudsley, a San Diego-based real-estate investor, also is undaunted. He arrived in the city in mid-April.

Mr. Maudsley, 57, spent a week meeting with brokers and viewing apartments in Recoleta and Palermo, a hip, bohemian neighborhood.

But he isn’t pulling the trigger quite yet. He met with financial and legal advisers who can help him quickly close a deal if he spies a bargain. He said Argentina’s property market appeals to him because “it is a cash market,” less likely to be affected by rising and falling interest rates.

“The peso aspect is a real risk, but I’m banking on the fact that things will normalize down there,” said Mr. Dickinson, the technology sales executive. “I think the country will get its act together.”